The WEF’s namesake conference is widely known as an opportunity for the world’s wealthiest and most influential people to discuss pressing political, environmental and social challenges. It hasn’t been held in person since 2020, due to Covid-19, but this week it was back in full force. The theme this year was “working together, restoring trust”.

Before the pandemic, climate change had gradually become the Davos agenda. At the 2020 event, all business leaders and global leaders were urged by organizers to set net zero emissions targets for 2050 at the latest.

The Covid-19 vaccination program and responding to the economic fallout from lockdown restrictions around the world remained on the agenda this year. The leaders also made a point of condemning Russia’s war in Ukraine and discussing the energy price crisis and disruptions to global food supplies.

But the environment was not forgotten on the agenda – 90 of the Forum’s 270 panels scheduled time for discussions around the climate crisis. The net zero targets of regions and nations, by the end of 2021, covered 90% of global GDP.

Before we get into the official announcements from nations and companies, it’s worth noting that climate activists staged a major protest outside of the WEF event this week. Participants held banners indicating that previous editions of the conference had failed to mobilize meaningful or targeted action to reduce global emissions, improve climate adaptation or implement an appropriate loss and damage framework for the most affected groups.

Vanessa Nakate told protesters that “a lot of people here are out of touch with reality [of the climate crisis]”. She added: “They’re in a bubble, they’re in their own world.”

For some time, young climate activists have been calling on Davos attendees to turn words into action faster. At the last face-to-face meeting in early 2020, Greta Thunberg and other Fridays for Future attendees said their demands for renewed international efforts to reduce fossil fuel supply and demand were “completely ignored”. .

At this year’s conference, climate activists invited to speak included Kenyan Elizabeth Watuthi (pictured), who urged participants to “understand the intersections” of the climate crisis and related global challenges, including food security. Some 3.1 million people in Kenya are currently in need of food aid, according to ReliefWeb, after three consecutive years of dry rainy seasons. 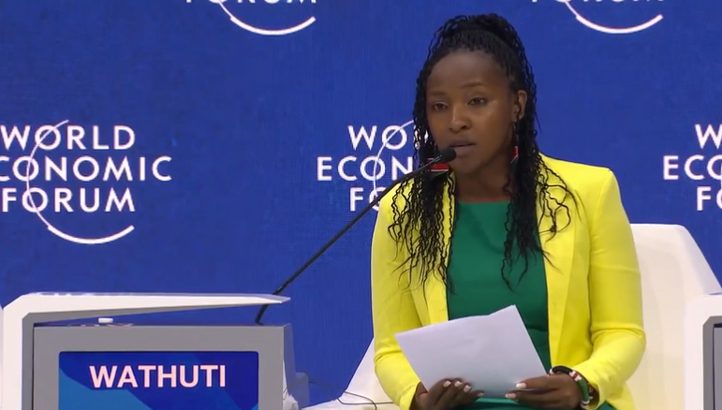 On Monday May 23, the WEF launched the Indian chapter of the Alliance of CEO Climate Action Leaders. The Alliance as a whole was founded in 2014, with the ambition of supporting companies in all sectors to align their actions with the Paris Agreement. In line with updated science, its ambition is now to align with the Accord’s 1.5C trajectory and transition to a net zero world.

Prior to the addition of the Indian chapter, some 92 companies had joined the Alliance. The Global Alliance is co-chaired by Ingka Group boss Jesper Brodin, Royal DSM boss Feike Sijbesma and Swiss Re boss Christian Mumenthaler. The addition of India is expected to see at least a dozen additional companies join in the next few months. The Indian chapter is chaired by ReNew Power’s Managing Director, Sumant Sinha.

The WEF said in a statement that the India chapter will “bring together government, business and other key stakeholders” to achieve India’s net zero goal by 2070, set last fall.

Along with the Indian chapter, the alliance now represents companies that collectively generate more emissions per year than the EU.

On Tuesday, May 24, the Task Force on Nature-Related Financial Disclosures (TNFD) announced three expansion activities, to help it continue its quest to create a framework for companies to measure and reduce their natural hazards.

The working group confirmed the formation of “consultation groups” of various national and regional organizations to help increase engagement with the framework. Nations involved in these groups include Australia, India, the Netherlands and the United Kingdom.

He also announced a partnership In addition, TNFD is partnering with the International Union for Conservation of Nature (IUCN) to engage with Indigenous Peoples and Local Communities (IPLC). Over the next 12 months, these organizations will inform the development of the framework of the potential impacts and considerations that nature will have on these voices and communities.

TNFD launched its first beta framework in March and expects a finalized version to launch in the second half of 2023.

Summoned by @GFI_greenUK joins #TNFD as one of 6 new focus groups. These market-led groups will bring together business, finance, public sector and civil society to discuss #nature-related issues and beta framework

4. The transition of industrial clusters to the Net-Zero initiative is growing

Also on Tuesday, industrial clusters from Belgium, the Netherlands, Texas and Ohio joined the WEF’s Transitioning Industrial Clusters to Net Zero initiative. The objective of the initiative is to support industrial clusters in designing and implementing a transition path to net zero, fostering cross-industry collaboration across the world. Industrial activity is notably responsible for 30% of annual global emissions.

The new entrants have doubled the number of clusters participating in the initiative from four to eight. These are the Port of Antwerp-Bruges, Brightlands Circular Space, the H2Houston Hub and the Ohio Clean Hydrogen Hub Alliance.

The WEF has indicated that more than a dozen additional clusters are in the process of joining the initiative. Its primary ambition is to have at least 100 clusters join.

The big news from the private sector on Wednesday May 25 was a major update on the First Movers Coalition – an initiative first launched at COP26 with the aim of scaling up the development of low-carbon technologies for sectors that are difficult to reduce.

The UK, Denmark, India, Italy, Japan, Norway, Singapore and Sweden have signed on as government partners in the Coalition, which is led by the US federal government as well as the WEF.

In the private sector, the Coalition has opened up to companies in the aluminum value chain and to companies offering carbon dioxide removal technologies or wishing to invest in them. New members include Ball Corporation, BHP, Ecolab, Enel, EY, FedEx, Ford Motor Company, HeidelbergCement, National Grid, PwC, Schneider Electric, Swiss Re and Vestas. Companies participating in the Coalition now represent over $8.5 billion in market capitalization.

We will only reach net zero if we bring disruptive clean technologies to market at scale. Today @Google joined the #FirstMoversCoalition at #wef22 next to @John Kerry to decarbonize the hardest-to-reduce sectors of the economy.

On Thursday 26 May, more than 30 companies pledged to collaborate with each other and with national, regional and local policymakers to create “shared, connected and carbon-free mobility ecosystems”.

The Urban Mobility Scorecards initiative will assess the performance of cities around the world in terms of environmental sustainability and the resilience of their mobility networks. These assessments will be completed this year and serve as benchmarks against which cities can work with key stakeholder groups to design and implement targeted changes.

Also on Thursday, a new World Commission on Water Economics was officially launched. Much like the natural capital movement, which has sought to integrate the value of nature into policy-making and financial decision-making, the Commission will seek to redefine how water is valued and ensure that this value is taken into account when important decisions are made in the private and public sectors.

Additionally, the WEF announced a new $15 million fund that will invest in those developing innovative solutions in the field of freshwater resource management. The fund will be managed by the WEF’s open innovation platform, uplink, with support from IT giant HCL Technologies, and will be spent over a five-year period.

The UN estimates that global water demand will exceed sustainable supply by 40% by 2030. Contributing megatrends include population growth, rising global temperature, changing weather patterns and overuse of resources natural by the private sector.

© Faversham House Ltd 2022 edie news articles may be copied or transmitted for individual use only. No other reproduction or distribution is permitted without prior written permission.