There are too many small charities so they should be merged to improve efficiency, former pensions minister Guy Opperman told the Conservative Party conference yesterday.

Opperman, who served as pensions minister for five years before Prime Minister Liz Truss’ recent reshuffle, also criticized charities for being too involved in politics.

Lynn Perry, chief executive of Barnardo’s, agreed that charities should improve their collaboration, but defended their right to advocate on behalf of their beneficiaries.

“I would scrap everything”

Opperman preemptively apologized if he had offended anyone from a small charity in the room and explained that when he had a brain tumor he had access to support from up to 40 different charities for brain tumors.

He said: “If I were a lawmaker, and obviously I won’t be for the next 18 months, it’s pretty clear I would be intervening massively in the medical world and effectively imposing that you can’t have small Non-profit organizations.

“The truth is, you’re really using your resources inefficiently and duplicating things that people are largely already doing.

“I would delete the lot and merge them all into one or two at most, so we can push real change there. They may have a localized contribution, but the truth is there is too much merging of pre-existing work and a loss of the impact you could have. But don’t worry, there’s no way I’m a minister to do this.

In response, Perry said that as an industry “we need to improve coordination” but that Barnardo’s “does a lot in partnerships”.

Although she said she shared some principles with Opperman, but said he expressed some “devaluation of what the sector can bring in some of the challenges” in his speech.

Meanwhile, Matt Whittaker, Managing Director of Pro Bono Economics, said: “You have to nurture any sector important for growth and well-being. The role of the state with civil society is to invest in its capacities and to work with its partner – as seems to be automatic for companies.

Also at the conference, Lee Anderson, the Conservative MP for Ashfield, accused people of creating food banks for themselves rather than their beneficiaries.

Speaking at an event for Young Conservatives, he said: “I strongly believe that we need food banks, but not as much as we have. Every benefactor starts these small projects to feel good.

“Charities get too involved in politics”

Opperman also said charities “get too involved in politics to the detriment of themselves”, leading panelist Jerome Mayhew, Conservative MP for Broadland.

He said charities should steer clear of politics and ‘focus on what you’re actually doing, that’s my strong advice’.

Perry said she disagrees that politics is not the place of charity and that it is important that the voices of children and families are heard.

“We don’t necessarily see this as ‘interference in politics’, but we see it as an attempt to influence change for people in our communities who, for whatever reason, are disadvantaged or vulnerable and whose needs do not are not satisfied,” she said.

Perry said she felt it was “really important that these voices be heard and expressed” by the government.

Earlier in the event, Opperman said he felt the UK as a country was ‘wealthy insensitive’ and that ‘one of the reasons we don’t have [as much] philanthropy is because we denigrate wealth”.

In contrast, he said the United States celebrates wealth, so their philanthropy is “in front of ours because they don’t feel like they’re ostracized.”

“So charities need to change their approach to this,” he said.

The side event was organized by think tanks Pro Bono Economics and Onward. 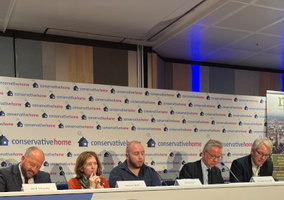 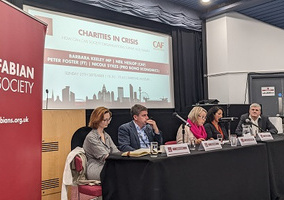