As restrictions begin to ease and people anxiously await a return to normalcy, attention is turning to what Australian farming might look like after COVID-19.

While the magnitude of the economic impact has yet to materialize, other changes introduced in recent months are expected to last long after the lockdowns are released.

And many are positive, ranging from the accelerated adoption of technology driven by social distancing and the demands of working from home, to the renewed attention the pandemic has brought to food security and the need for a sector. strong Australian farmer.

Rapid digitalization has been a pronounced trend, with widespread movement restrictions accelerating the adoption of online selling options for livestock and rural property. 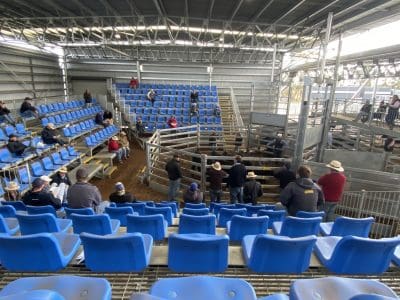 A social distance shopping gallery at a Mortlake store sale in April, where competition was stepped up through live online auctions through the Auctionsplus platform.

AuctionsPlus had its biggest sales on record during the lockdown period, while new online services allowing outside buyers to place live bids remotely during physical livestock auctions and breeder sales were also launched. tested and successfully launched.

It wasn’t that long ago that “Zoom” was something a Mazda car did, at least according to the advertisement.

In just a few short months, the term has become a shorthand for the various forms of video conferencing and digital connectivity that have become an integral part of life – where internet services support it – due to personal contact restrictions.

Now that they have been forced into mainstream use, it seems likely that online conferencing and virtual meetings will stick around long after restrictions are eased as people seek to maintain more flexible working arrangements and save money. time, travel and accommodation costs.

But the experience also didn’t spell the end of “old-fashioned” face-to-face meetings – rather, it reinforced their value.

The limited nature of video meetings has demonstrated that there is still no substitute for the detailed and information-rich interactions that flow from an in-person meeting.

Chairman of the Red Meat Advisory Council Don Mackay said there is no doubt that more industry meetings, especially those dealing with procedural matters, will be held remotely in the future to reduce costs, but face-to-face meetings will remain essential in the future. many cases. 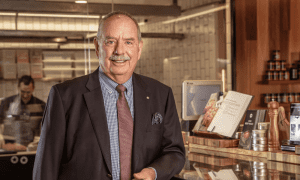 “There are times in face-to-face meetings where you can sit down and chew things up and have discussions that you don’t have in a formal setting,” he said.

“I think there will be a combination.

“It will change a number of things in a reasonably permanent way for the better, and the right mix will be the challenge.

“But humans are social animals. Lack of social interaction is not a good thing on a permanent basis, face to face meetings will become important again. “

The drastic reduction in air services during the pandemic also served as a catalyst for the federal government to back calls from the Australian grain industry to replace inefficient paper-based certification for grain exports with faster electronic documentation, saving money. effectiveness that many hope will stay in place after COVID restrictions ease.

Indeed, it highlights perhaps the most critical of all the legacies of the COVID-19 event – the wake-up call it has sounded to the public and governments that food security and agriculture are a key element of national security and ensure social harmony.

The panic buying that cleared supermarket shelves of staples like toilet paper, pasta and red meat and drugstores of life-saving drugs that Australians had previously taken for granted has been a wake-up call for many , exposing Australia’s lack of local manufacturing and its precarious dependence as an island nation on imported goods.

Australia is required by law to have a fuel reserve of at least 90 days, but decades of apparent complacency have seen those reserves shrink to less than 30 days of actual supply, putting the country in a one month delay after shutdown in the event of a major international supply shock. After seeing the public unrest that has arisen over toilet paper shortages, governments are realizing what would happen if Australia ran out of food, an alarming reality to which countries like the United States are still faced in terms of the COVID-19 threat forced shutdowns of slaughterhouses present to the meat supply.

Conversations with agricultural industry leaders over the past few weeks suggest that there has been a distinct shift in government attitudes and a new urgency in dealing with the industry’s longstanding but previously ignored calls for reduce unnecessary supply chain costs to further strengthen Australia’s agricultural sector and food security. .

The issues highlighted by the red meat industry for action during and after the pandemic include a single national rulebook for the regulation of the Australian red meat and livestock industry, consolidation and digitization of supply chain traceability and quality assurance programs, a national sheep sourcing project and properly addressing national connectivity services and infrastructure through renewed regional telecommunications programs. (See more Australian red meat and cattle industry’s 8-point action plan in the aftermath of COVID-19)

“Australian farmers may seek greater certainty of supply for inputs such as fertilizers, and this could provide a catalyst for the development of a competitive Australian fertilizer production sector,” he said. in a recent COVID-19 analysis.

Five years ago, nearly 60% of glyphosate imports were technical ingredients formulated in Australia to provide herbicides for the domestic market, he said in a recent presentation. 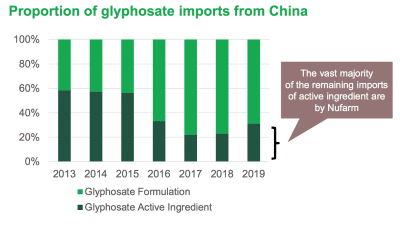 However, Chinese producers now had a greater incentive to export fully formulated products. This has led to a decline in Australian formulation and increased national dependence on Chinese producers. (see table).

“We know that security of supply is a broader issue that is of concern to the government as well,” Peter O’Keefe, Managing Director of Nufarm Australia and New Zealand said on April 29 at the PAC Partners Agfood virtual conference.

“As a nation, Australia has lost a lot of domestic manufacturing over the past few decades, largely because we are a small market and struggle to compete without scale and without access to energy and labor. of work at competitive prices.

“Obviously, inputs such as crop protection and fertilizers are essential to support domestic food production and agricultural exports…

“We are confident that Nufarm can continue to compete with imported products, as long as the playing field is level and as long as we maintain the support of local farmers and distribution partners. “